Click here for: Tips on shooting with the NuView

Turn Your Camcorder into a 3D Movie Maker!

The Nu-View 3D Adapter is a video camera add-on which turns almost any ordinary camcorder into a 3D movie maker. It attaches easily to nearly any consumer or prosumer video camera and works for all current world-wide video and TV systems (PAL or NTSC). The 3D videos can be watched immediately on any standard television set, using a 3D Video Viewing System. In most cases, the Nu-View Adapter will not interfere with the zoom or autofocus functions of the video camera. The recorded material can be copied and edited, just like any standard video recording, with no special equipment required. It's the Ultimate Camcorder Accessory! Compared to earlier 3D video recording systems which were based on two separate cameras or expensive double-lens cameras, the Nu-View is a major step forward in terms of price, handling and availability. 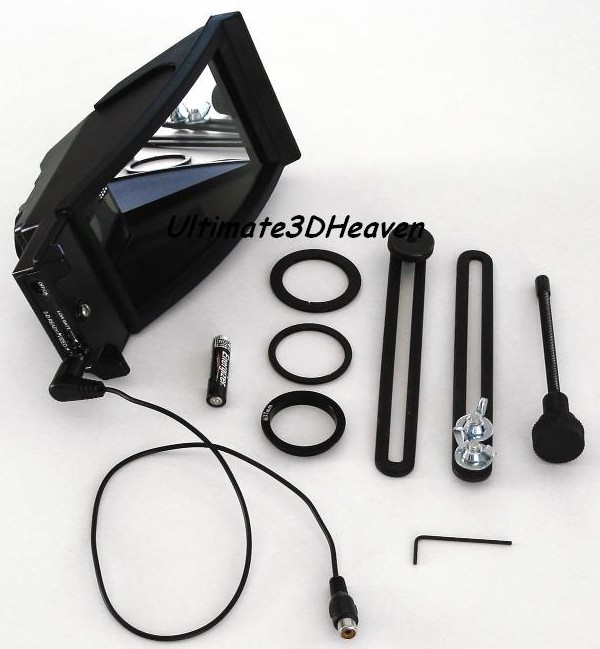 The Nu-View 3D Camcorder Adapter is like a time machine in one small package. Watching your home movies in 3D will bring you right back to the time and places visited. The illusion of being there is much stronger than you'd get watching an ordinary 2D video - you might even experience deja-vu! The 3D visuals produced by the NuView are as natural as using your eyes. When watching a 3D Video you'll be drawn closer and closer toward your TV screen. It's almost impossible to keep the usual TV viewing distance. You won't lean back in the chair, you'll lean forward. The eye's of your viewers won't be fixed to one spot on the screen. They'll begin to wander around inside the movie's scenes, just like in the real world.

Ease of Use: Installing and handling the NuView system is very easy - in fact, it's fun to use! A fully illustrated, easy-to-understand instruction manual takes you through the process step by step. Once attached to your video camcorder, the autofocus, exposure, zoom, and white balance camera functions are performed as usual. It's just as simple to use your camcorder to record in realistic, Stereoscopic 3D as it is to record in flat, dimensionless 2D.

Near Universal Compatibilty: Works with most video camcorders and comes with multiple adapters. It incorporates its own female fitting so you can still tripod mount the whole assembly.

The NuView adapter uses a proprietary, patent pending process which allows two distict views (left and right eyes) to enter the single lens of a camcorder, in order to provide a true Stereoscopic 3D image to be recorded and played back. A threaded optical adapter is first attached to the camera's filter threads, which provides a stable, optically aligned bayonet mount for the NuView. After the adapter is attached, the camcorder is used in a normal manner to view and record. To duplicate true Stereoscopic 3D visuals, the adapter provides the user with a simple convergence control. This control sets the 3-D window from 4 feet to infinity, which allows you to converge on objects near or far. The results of this will determine the 3D effect of your video - where everything appears to be deep inside the TV screen or where the foreground objects seem to jump out of the screen, just like in classic Hollywood 3-D movies.